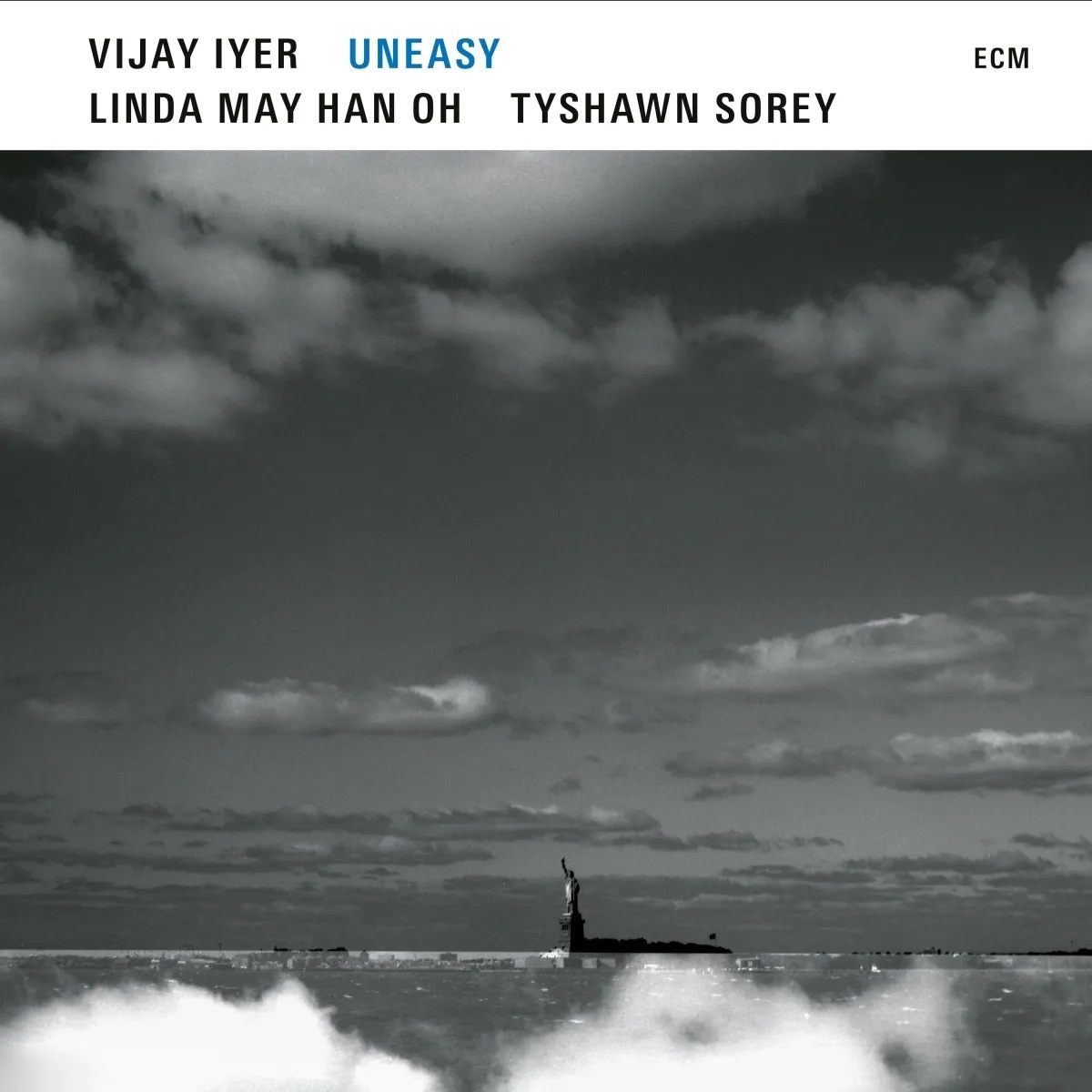 The latest release from the Vijay Iyer Trio – though that moniker seems to have been mostly dropped on the album cover and in press material in recognition that this latest formation makes up an entirely new group from the trio of the last decade – marks the culmination of a two-decade collaboration between Iyer and Tyshawn Sorey. The pianist and drummer (respectively) met in 2001 when Sorey, in downtime during a rehearsal, sat down at a piano and played one of Iyer’s improvised solos from memory. The trio first convened in 2014 at the Banff International Workshop in Jazz & Creative Music where Iyer and Sorey are the artistic directors and the third member – and secret weapon of the trio – Linda May Han Oh is a visiting instructor. Though it wasn’t until 2019 that they recorded Uneasy – a major event in creative music, an impossible-to-Google movement of avant-garde performance and composition, and one of the best albums of the year so far.

For casual jazz listeners, Sorey is likely to be the most famous name here – and not unrightly so – but Iyer is, relatively speaking, the elder statesman, and the album consists of eight reworked versions of his compositions from the last decade, as well as a Cole Porter standard and a composition by Iyer’s mentor Geri Allen. The trio is a tricky formation, and many of the songs were originally composed for a much larger group of musicians. Each member of the trio is a virtuoso both technically and creatively in their own right, but Oh’s contribution is especially impressive. Across the record, her double bass is constantly shapeshifting between its rhythmic and melodic roles, while filling out the sonic space left between Sorey’s razor sharp playing and the bright chime of Iyer’s piano.

“Touba” is exemplary, here. Midway through, as Iyer launches into his solo, Oh fills in the low-end, but as the song morphs into a crashing anthem led by Sorey, Oh plays counterpoint to the emerging bass line of the piano until emerging as a soloist and developing a melodic motif that reinvigorates the song as the trio balances out again and moves toward the pianissimo close. While on “Configurations,” Oh sometimes recedes into the background, once you attune your ear to her playing, it’s clear she’s holding the track together. The middle of the track, in which she solos, is like lifting the curtain on the inner workings of the music.

But Iyer and Sorey get their moments as well. The title track opens with more focus on the melodic trade-offs between double bass and piano – Sorey’s crash is diminished to a whisper. The rhythmic shift a third of the way through the composition brings Sorey to the fore, though. For the rest of the track, he sculpts rhythmic figures around Iyer’s impassioned playing, until escalating into a euphoric and frenetic passage as precise as it is beautiful. From there, the track is his until he cedes ground to his group mates once again.

This push and pull between creative players is present on every track, but “push and pull” feels inaccurate. The playing is natural and flowing – organic. There is a real sense that these artists are at every moment looking to find their ideal place within the sonic landscape. Even “Augury,” a flowing and expressionistic solo piano improvisation Iyer recorded after the trio’s sessions had ended, carries forward the ethic of the group. Iyer develops rich bass figures on which to map his more percussive playing at the high end. On the level of color and texture, the darkness of the track and the extreme contrast Iyer builds between the softness of the bass and the sharpness of the treble emulates the trio as well.

Uneasy was composed and recorded over a tumultuous decade and on the cusp of a time perhaps more uneasy than what preceded it. The openness of the music and the palpable solidarity between the players is directly connected to the political impetus of the compositions, which come out of events like the Flint water crisis, the U.S. imperial surveillance state and the ongoing movement for Black lives. That the album ends with “Entrustment” – a parting of the clouds after the moody unease on much of the record – is an assertion that the solidarity and dynamism of creative music and its practitioners might be a model on which we can begin to imagine a better future together, and to tear down the oppressive structures that work against such possibility.

While DOOM’s flow on studio albums is sometimes lauded for its laid-back quality, there is…