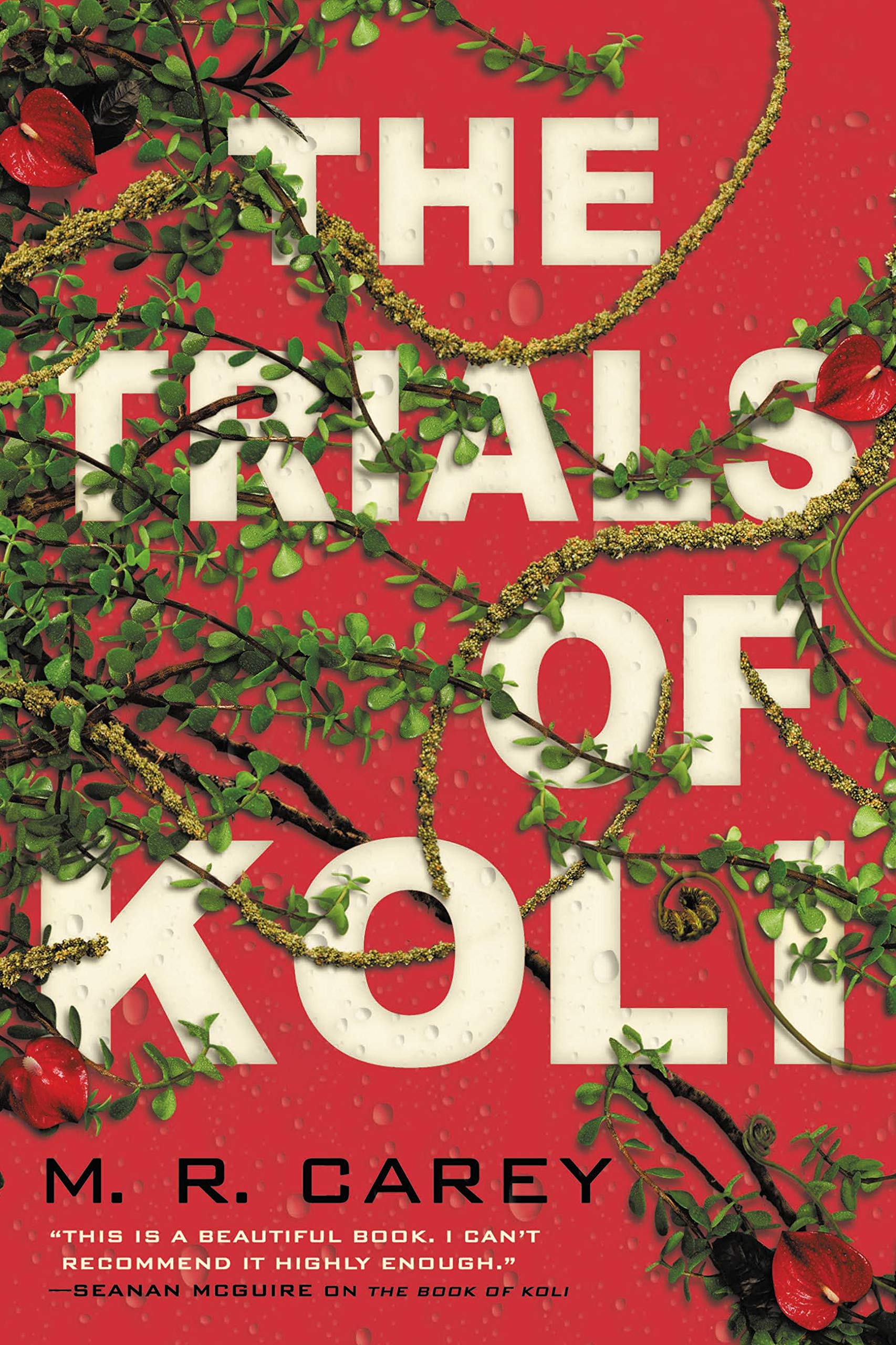 The hinge point on which the genre of post-apocalyptic fiction balances is how, precisely, our current society is preserved into and beyond the eschatological event that brings the book’s world into existence. What parts of our everyday lives are maintained into this indeterminate future and how have those features been distorted? Crucial to this endeavor, of course, is also nailing down a plausible apocalyptic event. What really demarcates the rare treasures in the genre from the dross is whether or not the setting – which is our world, just horrifically stilted by violence, decay and oblivion – is rendered in a credible and fascinating manner. On that front, M. R. Carey’s Rampart Trilogy is the shiniest bit of treasure to come along in post-apocalyptic fiction in some time.

Book two in the trilogy, The Trials of Koli, is the most geographically expansive volume in the series and is, therefore, the one that most shows off the excellent worldbuilding upon which the trilogy is founded. The first book in the series, The Book of Koli introduces the primary protagonist, a first-person narrator called Koli Woodsmith. Koli lives in Mythen Rood, a small, isolated village in the Calder River valley – in what used to be the boundary between Lancashire and Yorkshire, England – at some unspecified point in the future. The ruling class of Mythen Rood are the Ramparts, the handful of lucky souls who can manage to operate the few pieces of still-functioning technology from the pre-apocalyptic times. In setting up Mythen Rood and the Calder Valley as places, Carey avoids most of the worst pitfalls of the genre: there are neither the rugged individualists re-enacting false frontier myths in some ultra-violent hypermasculine war of all-against-all nor a tech-granted reprieve for the villagers from their constant near-death struggle against the elements. The people of Mythen Rood work together, though not necessarily harmoniously, and they work very hard, and they just manage to squeeze out enough food and other essential resources to survive another day. They feel like a real community in peril. During Book, Koli is banished from Mythen Rood and forced to scuffle for his survival alone; solitary existence is not really possible in his world, though, so his banishment is essentially viewed by everyone as a death sentence.

The Trials of Koli presents a narrative departure from The Book of Koli. In the former, the whole book is written in the first-person with Koli as the only point-of-view character. In Trials, the story again begins with Koli, but expands in the first few chapters to include a second first-person narrator, a character called Spinner Tanhide. Spinner is not a new character; she is quite vital to the plot of The Book of Koli, but she is new as a narrator. Trials, then, uses Spinner to keep the reader up to speed on Mythen Rood while Koli, who survived the early days of his exile by making two friends, is on the road. Trials shifts back and forth from the adventures (and travails) of Koli and his traveling partners as they venture south to make it to London, where, they reason, there must be loads of technology from the pre-apocalyptic times, to the more community-based struggles of Spinner in Mythen Rood. The book accomplishes a great deal of worldbuilding, too, as it explains what the rest of England beyond the Calder Valley looks like and demonstrates what sorts of ideas and knowledge have been preserved since the apocalypse and what has been lost or distorted. Religion is particularly well handled by Carey.

Another major component of Trials, and this is a standard burden for the second book of a trilogy, is that it further explicates the lore of the series. In this case, that lore is primarily centered on the apocalypse that struck the former (that is to say, our) world and rendered it into Koli’s world. At its core, this apocalypse was environmental, but, because ecological disaster will result in political and social collapse, the way that the world ended in Carey’s trilogy involved lots of direct violence, warfare and irresponsible politicians. In Trials, in particular, the apocalypse very closely resembles another famous fictional British apocalypse, the one playing out in Children of Men that is simultaneously environmental and political and also includes rich veins of religious angst and community-building.

The Rampart Trilogy is an exemplar of its genre and The Trials of Koli, as the heavy-lifting, move-the-pieces-around-the-literary-chessboard second book in the series, manages to accomplish all of its obligations to the trilogy while still being an immensely engrossing, entertaining and complete story in its own right. As second books in fiction trilogies go, it is among the best.

Not only did La Strada begin Fellini’s unstoppable rise as a top-tier filmmaker, it also h…