May 09, 2021
Home Music Discography Discography: MF DOOM: Born Like This 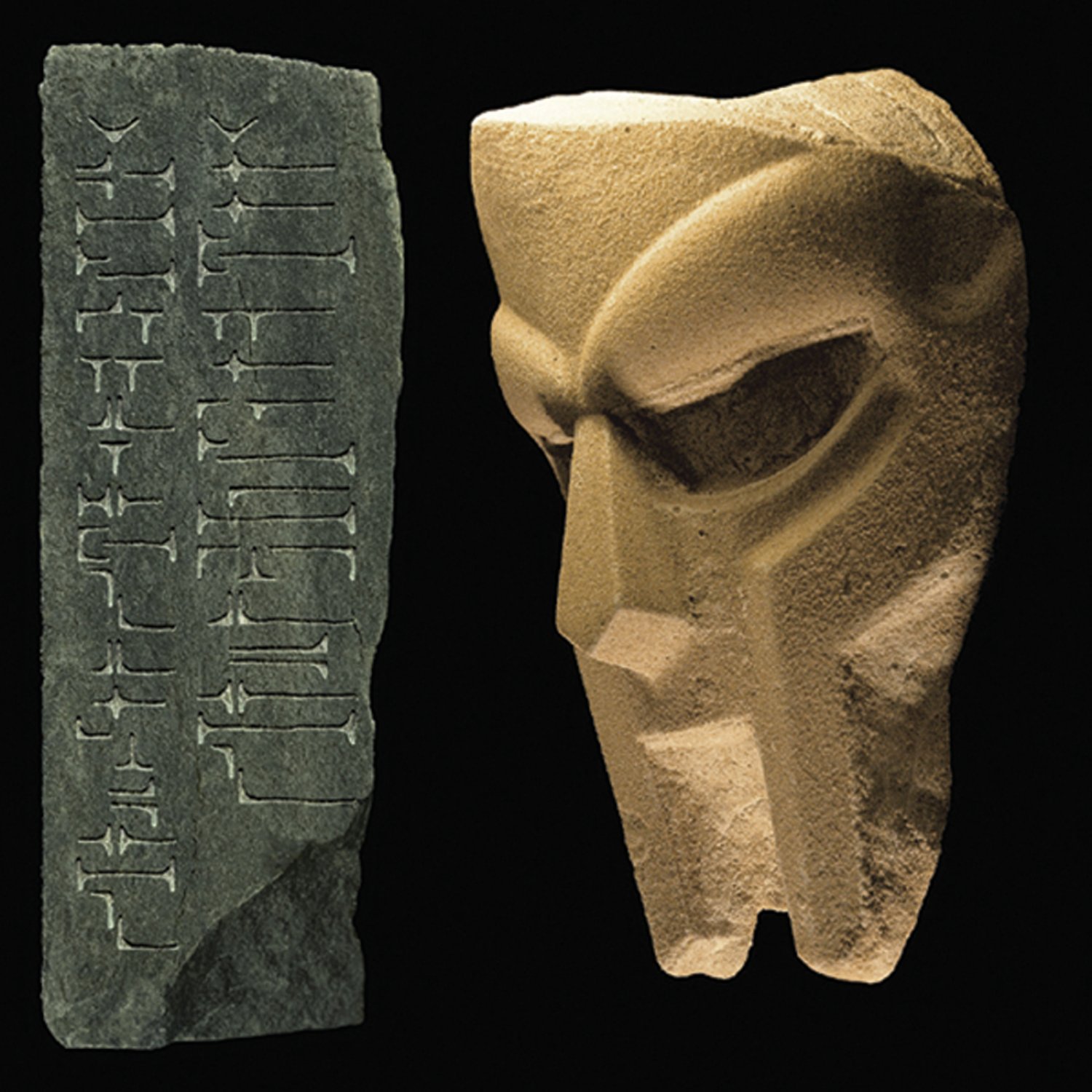 Let’s start near the end. “Could it be I stayed away too long? Did you miss these rhymes when I was gone?” Coming on the penultimate song (not counting voicemails and an instrumental coda) and sung on 2009’s Born Like This by MF Doom — now just DOOM (“all big letters, but isn’t no acronym,” he raps here on “Ballskin”) — these words are an interesting summation for the wild career of Daniel Dumile. At times he was ever-present, making albums under multiple personas at breakneck speed. At others, he was seemingly in hiding, the metal mask collecting dust for years on end. DOOM’s sing-songy question reveals genuine worry: four years without a solo album isn’t a lot for many artists, but the years between 2005 and 2009 were practically a famine. 2005’s Danger Mouse collaboration/surprisingly-tasteful Adult Swim infomercial The Mouse in the Mask showed us that the supervillain excelled as part of a crime duo — if he’d wanted to, he could have ridden that album’s wave and ended up a legitimate superstar. But in its wake, he lazily tread water, appearing in three or four songs for each of three years, likely enough to make a few bucks. Did a glimpse at a potential future in the mainstream limelight give DOOM too many flashbacks to his dealings with Elektra in the KMD days? It’s hard to say, but as any genius slacker adept at self-sabotage might tell you, that theory is extremely possible.

None of this is really surprising, once you know how he worked as a creator. Much like every DOOM album is a reaction to the one before it, so follows Born Like This. The concept behind The Mouse and the Mask shouldn’t have worked; instead, though, it’s the most effortlessly charming of all his albums regardless of which column you include it under. He sounds like he’s having a blast on that album, with his clear joy creating a fantastic synergy with Danger Mouse — a year past the unmitigated internet success of The Grey Album still in his period of pre-Gnarls Barkley and Black Keys hungriness — who fed off his energy and amped the supervillain up. Because of it, the pendulum took four years to finally reach its terminal location with Born Like This.

This is DOOM at his grimiest and most bleak. The satisfying brightness of his music is completely absent here. There are still plenty of cartoony samples and fun moments, but there are also ones where cops explain the nuances of their approach to a hostage situation seemingly still in progress. “’Fore we run in, we’re stuck in there and they can shoot us while we’re just, we’re stuck in a cage,” we hear one explain at the end of “Absolutely.” DOOM himself produces much of the record, but there’s a now-customary appearance with “Absolutely,” plus another four with Jake One lending his hand. But the most distinct songs here — “Gazzillion Ear” and “Lightworks” — wrap themselves in unforgettable beats by the late J Dilla, who passed away during DOOM’s four-year gap. Dilla does double duty on “Gazzillion Ear,” with DOOM interrupting one beat by announcing “Dilla! Dilla! Mix! Mix! Mix!” and swapping to another beat. It’s a spectacular moment, and it shows how much joy he’s taking in making something incredible out of his old colleague’s work.

Even with that joy, though, darkness protrudes out of every grimy corner of Born Like This – its name taken from Charles Bukowski’s grim, apocalyptic poem “Dinosauria, We” – you can hear Bukowski himself reading an excerpt from the poem at the beginning of “Cellz,” his (ahem) doom-laden words backed by a beat positively dripping with menace. On that track, DOOM rides in on the wave of terror wrought by the apocalyptic poetry of Bukowski, announcing “DOOM from the realm of El Kulum, smelly gel fume/ Separating cell womb to Melle Mel, boom” — though the menace is cut down slightly once you realize that the sample in the bridge is of Dr. fucking Bronner. Shockingly, the only guest who doesn’t use the album to bring out their inner bruiser is the always-outstanding Empress staHHr — perhaps the only rapper who could get away with rhyming “shrubbery” with “lovely” — who rhymes over DOOM’s own “Passion Flower” from Special Herbs, which makes it the brightest track here.

If the portrait of DOOM’s villainy we get from Born Like This accomplishes anything, it’s in the way it actually undercuts the “super” part of the “supervillain” title — but for the better. Here, we don’t see him as some world-ending mastermind, but instead, a street-level thug who rises on the back of his own power, one who “wears a mask so the charge won’t grab,” and not because of any disfigurement. The aforementioned “Absolutely” gives a street-level view of inner-city crime and how to leverage power and violence as tactics to remain strong, labelling cops as “bigot-ass piglets” and bleakly recounting sexual assault and suicide to avoid punishment. On the other end of the album, the Ghostface Killah-led “Angelz” paints the same action with a broad, “Charlie’s Angels”-style brush, with the supervillain as, instead, a kingpin of the New York underworld with choice imagery like “He’s a rapist, murderer, convict, burglar/ The more they ran, the more their skirts got dirtier/ Sending shots like check day, FedEx expressway/ Boom! Bow! Bing!, you heard the gunplay.” Elsewhere, fellow Wu-Tang leader Raekwon unleashes a tsunami of dead young cops and eight-balls of coke, calling himself “a project thug, political gangster, starving Langston Hughes.”

And somehow, even more than usual, DOOM’s lyrics are impossibly dense. Each reference whizzes by with the same cool ease as him dropping the line, “Traded three beans for this cow, cheap talkin’/ Hawk men stalkin’ hear that we hawkin’ often/ Coughin’ to a coffin, might as well scoff the pork then.” Marvel at “MICROWAVE MAYO” and the impressive “Hold it down like Shatner to Spock/ Rapper jocks need to put a sock in their chatterbox/ The block got lined to VIAC stock/ Folks gather round, it’s no joke like knock knock” and “He’s like Worf, some say stronger though/ Off the top, Jay Strongbow, play along bro/ Wear a mask like yo, off The Gong Show/ Flow slow as Mongo, Don Juan thong pro/ For ya info when he’s not practicin’ Jim Crow/ A actress and some nympho bimbo.” That last one is from “Gazzillion Ear,” too, a song where he rhymes “throat,” with “note” and “zygote” in the same line, just 20 seconds earlier. And then there’s the labyrinthine “That’s That,” which almost seems to exist to give DOOM, its minotaur, a space to rage and rhyme his ass off, somehow reducing the immaculate “DOOM rock grammar like the kumbaya/ Mama was a ho hopper/ Papa was a Rolling Stone star like Obama” to being one of the least interesting lines in the song. Just about every track here is special in ways that it’s difficult to adequately tackle here.

Except, of course, for one — and that one song is truly the worst song in the entire DOOM canon, yet it’s one still worth examining: the egregiously homophobic “BATTY BOYZ.” In interviews, DOOM tried explaining that, due to the fact that DOOM is a villain, sometimes he’s going to shit-talk his opponents. That’s a fair cop, but he didn’t help himself with statements like “It’s not about homos. It’s about Batman and them. They just happen to be homos,” or by attacking the claim that he wasn’t homophobic with the classic “I’m not afraid of gay people!” chestnut. The song is obscenely goofy, especially in an album as grimy as Born Like This, but even if you allow yourself to believe that it isn’t Daniel Dumile ragging on gay people, it’s the persona of DOOM, it’s extremely difficult to ignore lyrics like – please forgive us for, well, every one of these lines – “It’s like a leotard fest/ How it got started is any retard’s guess/ Regardless, that’s they choice, no hate debate” and “Oh shoot, get a load of that fruit/ In thigh-high boots, red tighty-whities and blue cat suit” and, most disturbingly, “The man with no beard is more weirder than a she-male.” Add in the fact that one of the samples drops the word “faggot,” and you have to wonder if DOOM understood that being a villain doesn’t necessarily mean being a mean-spirited bully. Even in his relentless homophobia on this song, though, his rhymes are unreal: at one point, he rapid fire rhymes “John Henry” with “Don Henley, “Ron Jeremy,” ”monetarily terribly,” “therapy” and – ugh – “fairy spree.” Frankly, it’s fucking unfair that he was able to imbue such a godawful song with such bulletproof wordplay.

That contradiction is much of what made DOOM so compelling — and is, perhaps, a perfect metaphor for who he was professionally. He was one of the greatest rappers of all time, if not the greatest, yet he may be the only GOAT that could get away with stunning laziness like “Batty Boyz,” or even with straight-up sending impostors to perform as him. But when he wasn’t phoning in verses for other people’s songs and abstaining from making new music of his own, he was able to prove himself a powerful sorcerer, wielding words with a precision few in this world have ever managed.

After years of phoning it in on other people’s songs in the void period of his career, it’s absurd that DOOM was able to make something that sounded this fresh, this vital — even the rah-tah-tat-tat-tat of Dilla’s beat that opens “Gazzillion Ear” still draws us deep into the album as effortlessly as it did 12 years ago. He still had good work in him, of course — the next few years would see DOOM collaborating with others, like Jneiro Jarel and Bishop Nehru, arguably relying too much on the safety net afforded by having a creative partner. That he never made another album on his own after Born Like This is truly a tragedy, but thankfully, mining the remarkable depths of it has yet to get old.