In the 2003 film, Los Angeles Plays itself, director Thom Andersen explored how the City of Angels is portrayed in movies. Using footage from other films, Andersen created a vision where the city of Los Angeles itself is a character. Though that film is novel in execution, cities have long played key roles in commercial film, perhaps none more so than New York in Jules Dassin’s 1948 police procedural, Naked City.

Though Dassin’s is the name best remembered from the production, Naked City was actually the labor of love for journalist and film producer Mark Hellinger, who came up with the idea of New York City playing a central role in a picture. Hellinger had long brought the city to life in his newspaper columns and had the idea of doing the same thing in the cinema. Using a screenplay called Homicide by Marvin Wald and inspired by the book, Naked City, by photojournalist Weegee, Hellinger brought in Dassin to direct. 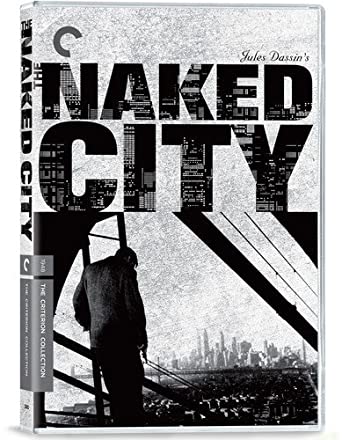 When New York doesn’t take center stage, Naked City is about the murder of a young dress model. Dassin painstakingly films the steps the cops, led by Lieutenant Dan Muldoon (Barry Fitzgerald), take to catch her killer. It’s an investigation that takes them to numerous locales throughout Manhattan, famous landmarks such as the Empire State Building, the Statue of Liberty and the Manhattan Bridge.
New York City sparkles in all its glory in Naked City despite a somewhat limp script and insipid narration by Hellinger. Dassin, who would go on to direct the noir masterpiece Rififi) (1965) is able to instill his own style onto the film, pushing the documentary feel into something a bit grittier, especially a brief, but thrilling chase sequence that features a shootout on the Williamsburg Bridge.

The true joy of Naked City comes in the wild art of everyday life in the Big Apple. It was the first studio movie shot on location in New York and Dassin used a variety of techniques, including filming inside a van, in order to keep the city thrumming at its normal pace, uninterrupted by the presence of a film crew. So while Muldoon and the cops investigate high-end dress shops, a doctor’s office and a pharmacy, Dassin allows us to see the streets vendors, the café owners, the kids playing at the open fire hydrant and the clatter of the elevated train. It is an important document of a city that has changed so much and so little since 1948. The push of a crowd entering the subway may feel the same, but the New York of Naked City does feel 73 years away.

Hellinger would die before Naked City premiered, struck down by a coronary thrombosis in late 1947 at the age of 44. Though the movie did just okay at the box office, it spawned a television series that used one of its lines as a catchphrase: “There are eight million stories in the Naked City. This has been one of them.” Dassin never capitalized from the movie in the Hollywood sense. He would be accused by the House Un-American Activities Committee of Communist sympathies and then relocate to Europe where he worked consistently through the ‘50s, ‘60s and ’70s. Naked City may be a ho-hum crime picture but it allows New York the chance to play itself, giving us – future viewers – a glorious time capsule from the past.