May 09, 2021
Home Music Anatomy of a Tracklist: Frightened Rabbit: The Midnight Organ Fight 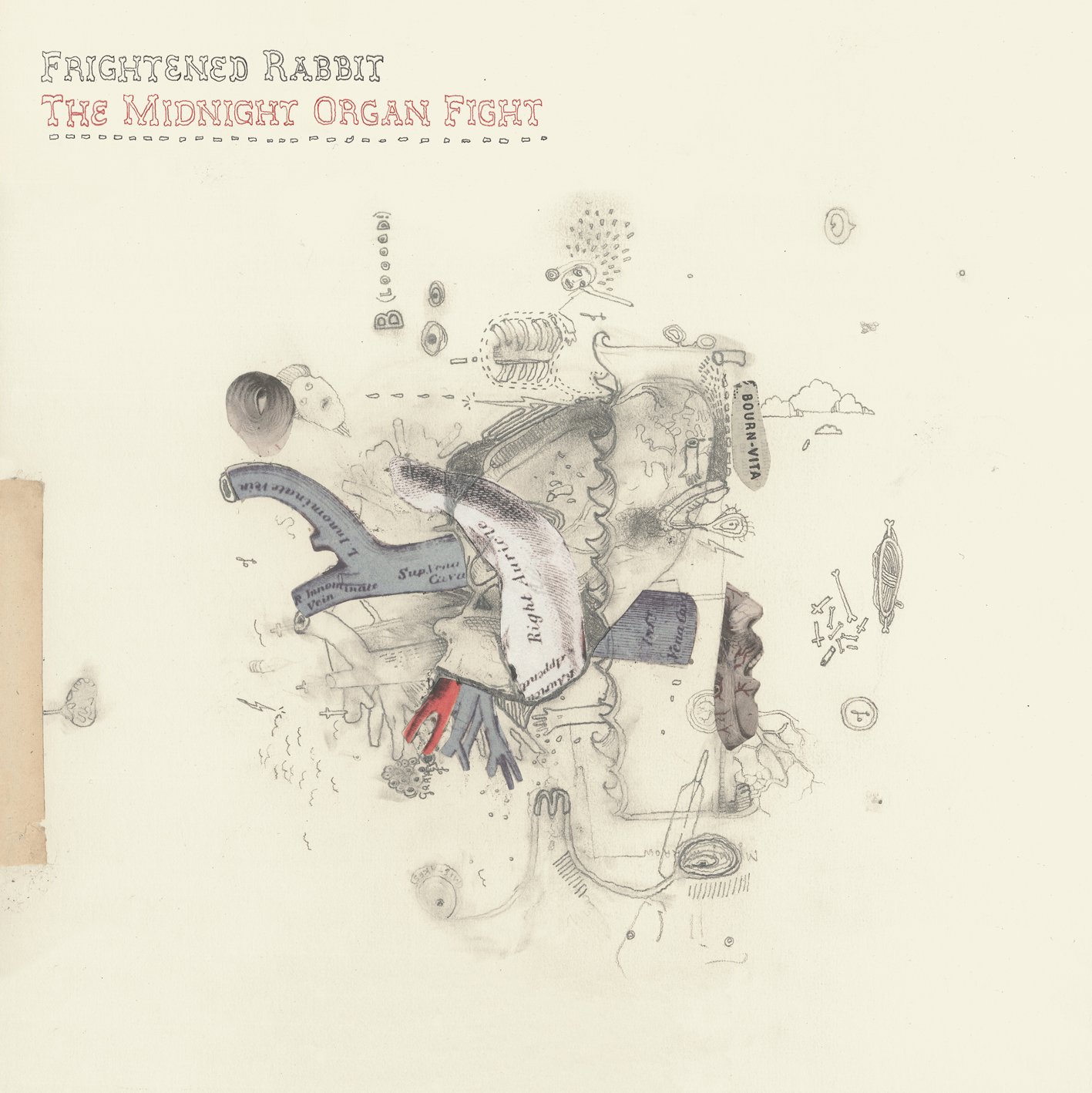 The title of Frightened Rabbit’s sophomore album, The Midnight Organ Fight, comes from a lyric on the record’s fourth track, “Fast Blood.” The title and lyric alike are sexual euphemisms, as the act of intercourse is a recurring theme on the album; the album title, especially when considered in the context of a whole, signifies something far more. The Scottish band’s second studio album, released in 2008 after debut Sing the Greys (2006), has been rightfully hailed as one of the finest and most blisteringly honest breakup albums of our time. It’s a masterful work that painstakingly details stories of a tortured narrator in the midst of immense heartbreak. That narrator is lead singer and lyricist Scott Hutchison, but his poetic passages of lyrical sincerity have always been about far more than pain.

The Midnight Organ Fight is about so many things; yes, there’s sex, but there’s also the love and heartache and confusion and comfort and shame and growth and everything else that comes with it. But the more you listen to this album, the more Hutchison’s lyrics communicate something far deeper and give the title new meaning. Throughout its versatile 14 tracks, we’re plunged into an autobiographical portrait of the specific, and far more complicated, organ fight that occurs between the brain, the heart and—if you consider it an organ, which I very much believe Scott Hutchison did—the soul.

“A cripple walks amongst you, all you tired human beings.” Right from its opening lyric, the album’s first track cements itself as a sacred song for anyone who relates to the all-too-accurate allegory of mental illness as a modern leprosy. Musically, it evolves and swells and eventually takes on the energy of a fist-pumping anthem, even as Hutchison woefully alleges of his partner in the chorus, “You must be a masochist to love a modern leper on his last leg.” The song outlines the particulars of a romance that may also be on its last leg, especially considering the narrator’s own self-defeating prophecy, but it’s also about the therapeutic yet destructive nature of continuing to hold onto whatever connection remains. Mirroring an earlier insight about himself (“I am ill but I’m not dead/ And I don’t know which of those I prefer.“), Hutchison ends the song with a new realization, pleading with his lover to sit down and start again: “You’re not ill and I’m not dead/ Doesn’t that make us the perfect pair?” “The Modern Leper” sets the sails for the album’s heartbreaking journey and establishes its holistic output of encouraging empathy, illustrating its narrator’s internal complications while also comfortably reassuring its listeners that they aren’t alone.

The album’s buoyant second track kicks into high gear right away with a bubbly assault of quick guitar strikes combined with Grant Hutchison’s spirited percussive work. In its lyrical nature, the song is hopeful albeit slightly delusional, as Hutchison strives to convince himself of feeling better after being “free in parentheses” and “not sure what I ought to do with it.” An onslaught of “I feel better” refrains and the claim that “This is the last song I’ll write about you” ring with dramatic irony, as we all know that there’s still 12 more tracks to come.

Sweeping and beautifully written, this finds Hutchison begging his former lover to “leave the rest at arm’s length,” citing his inability to fully let go of a relationship where the other half has since moved on. It covers everything in the getting-over-an-ex playbook, from the anger and woe of watching them with another partner (“I might not want you back, but I want to kill him“) to the failure of simply being able to confess how you feel, as evidenced in the closing lyric, “I am still in love with you, can’t admit it yet.” That acknowledgement alone is a step toward personal growth, and the track itself is also a brilliant forward motion in the album’s already versatile progression.

The album’s fourth track kicks off with a memorable guitar hook that’s eventually matched in force by the rest of the band, as we dive headfirst into the source of the record’s title and the album’s first overtly direct song about sex. It’s filled with metaphors and blunt statements aplenty, from the opening summons of “Good night. It’s stroke time” to the eponymous “fast blood” that “hurricanes through” the narrator. This is a superb track with plenty of lyrical power, and it musically evolves with nearly the same nature of the intercourse it describes. It builds and builds to a compelling climax that finds us once again hearing “Good Night,” yet this time with the “what now?” implications of the deed already having been done.

Pulsing with pure rhythmic energy, this track has taken on an entirely new meaning in COVID times, as Hutchison repeatedly extends the invitation, “Let’s get old, old fashioned, back to how things used to be.” This shuffling, toe-tapping, exuberant celebration of better days is an ode to turning off the TV and switching on the radio and twirling the night away. It’s one of the band’s most vigorous and crowd-engaging songs when performed live, as there’s nothing quite like the roar of dancing strangers chanting “OLD!” over and over again; the album version, however delightful, doesn’t capture that. Regardless, it’s arguably the album’s most enchanting track, something that can be revisited with enthusiasm time and again in ways that some of the album’s most pointed and sadder songs cannot be.

It feels appropriate for this to follow “Old Old Fashioned” in a musical sense, as both tracks have a thumping energy that calls for hips to move and heads to bob. With “The Twist,” we’re back to sex for the second time, as Hutchison focuses on the regrettably cold connections that can come with needing “company” and “human heat” in the form of a one-night stand or casual hookup. Here, he doesn’t quite care about the emptiness of the encounter, even admitting that his partner can call him the wrong name (“I’m Dave, if you please,” he humorously sings in the final chorus). In the end, he realizes the true “twist,” where both parties simply desire the same level of co-dependent comfort, despite the implications that may arise afterwards.

This minute-and-change instrumental break may seem inconsequential, but it delivers an air of spring-like transition to the thematic trajectory. Its lively, hope-filled energy uses effervescent guitar plucks and harmonious horns to brightly refashion and foreshadow a future riff heard in the far sadder “Floating in the Forth,” creating a perceptive connection between tracks that extends beyond the lyricism and into the musical motifs themselves.

Hymn-like organ chords open the gates for guitar strums and lyrical inquisitions about religion in the album’s eighth track. “Jesus is just a Spanish boy’s name/ How come one man got so much fame?” Hutchison asks, pointing out that the name is essentially pointless to anybody, like himself, that doesn’t have faith. But “Heads Roll Off” is hardly anti-religion, as it aims to create its own creed for listeners who praise the mantra sung in the song’s chorus, which states that dying is just a natural state of life and it’s the “tiny changes to earth” we make along the way that matter most. Lyrics like “When it’s all gone, something carries on” and “Dirt in someone’s eyes cried down the drain” highlight a cyclical, perpetual oneness in humanity that is fundamentally the root of all religions, and the song is a prayer for making positive impact toward the world in whatever way you can. It’s a crucial testament to human kindness that’s needed now more than ever.

With careful melodic escalations amongst a persistent chord progression, Frightened Rabbit weaves a heartbreaking tune of mournful regret and the inability to let go. Hutchison sings of strolling in reverse motion through the memories and mistakes of a relationship, and how his attempts to heal (“I’m working on my faults and cracks/ Filling in the blanks and gaps“) are hindered in his solitude (“And when I write them out they don’t make sense/ I need you to pencil in the rest“). There are hints of an ongoing back-and-forth in the established bond, and while he’s “working hard on walking out,” Hutchison remorsefully admits to returning for more despite the inevitable hurt it will bring, concluding with a refrain that is at once humorous wordplay, strikingly sharp and achingly romantic—”You’re the shit and I’m knee deep in it.”

The third and final entry in a triad of brilliant songs about fucking, this soaring work finds Hutchison contemplating the emptiness of casual sex touched upon in “The Twist.” Here, the necessity of “human heat” in the earlier song is now shadowed by the realization that “you won’t find love in a hole” and “it takes more than fucking someone you don’t know to keep warm.” The lyrics meticulously weave from playful wit where choo-choo trains and rocket launches become sexual synonyms to searingly candid lyrics about drinking too much, taking pills and being willfully ignorant of sexually-transmitted diseases. Even the concept of the “hole” takes on double meaning; on one hand you have the crude, fleshly answer, while Hutchison also explores the deep cavity one can dig themselves into by chasing the fleeting carnal pleasures outlined in the song.

In this dreamlike, piano-dominated interlude, Hutchison repeats what could have just been a throwaway refrain from “The Twist”—”it’s the year, oh, extra super very“—and turns it into something more memorable, especially after encountering the parallels between “The Twist” and “Keep Yourself Warm.” It’s a welcome, otherworldly separator between three of the album’s strongest tracks and the poignant pairing of songs that follow.

Here begins a one-two punch of the album’s most transparent entries, and it’s arguably the finest output of pure lyricism on all of The Midnight Organ Fight. Even reading the lyrics in silence can bring about a tear to the eye, as soul-bearing honesty and wisdom is prevalent through nearly every line. Hutchison doesn’t hold back, penning a letter to his ex that covers many of the themes already established throughout the album’s preceding songs. But on “Poke,” there’s a naked truth both in the lyrics’ bluntness and the decisive simplicity of the melodic orchestrations that makes this a standout track and one of the album’s most heartbreaking compositions.

“Floating in the Forth”

In what is easily the hardest song to listen to on the album, this outlines Hutchison’s personal battle with mental illness through a tale of suicidal ideation that hauntingly mirrors his own death a decade after this album’s release. While powerful, tragic reminders of Hutchison’s inner turmoil inevitably exist throughout the lyrics and always will, there’s still undeniable hope in his words. The two choruses conclude with the declaration, “I think I’ll save suicide for another day” and then, “another year,” a resilient message of temporarily talking oneself off the ledge. But sometimes, a moment of clarity is all you need to not succumb to your own worst intentions, and it’s not difficult to find Frightened Rabbit fans who themselves have been saved by this song, another, or The Midnight Organ Fight as a whole.

Just over a minute long, this feels like a hidden or bonus track more in line with “Bright Pink Bookmark” and “Extrasupervery,” especially following the conclusive strength of “Floating in the Forth”. Hutchison inquires, “Who’d you push down the stairs last night?” and then admits “I would’ve liked to have been a part of that.” He repeats, and the curtain closes on The Midnight Organ Fight.

Gore Verbinski has proven his penchant for organized aesthetic anarchy time and again, and…