Nestled within the Fellini back catalogue, between such celebrated titles as I Vitelloni, La Strada and Nights of Cabiria in his meteoric mid-’50s rise to fame, is a Fellini pic unlike any other. A filmmaker of vast talent and vaster ambition, he was never one to repeat himself, never caught resting on his laurels or merely meeting expectations. With the global success of La Strada only expanding, said expectations were for a commensurate expansion in Fellini’s style and in the scope of his productions. He’d deliver exactly that and with interest, yet not before what can only be described, in such a context, as a reduction: Il Bidone.

But what a reduction! Fellini went small and intimate with this terse, bleak 1955 melodrama, a mournful crime pic that eschews the narrative technicalities of its stylistic brethren in favour of focus on the emotional consequences of immoral and exploitative behaviour. He’d never strip his style back so far again nor restrain his visual sensibilities to such an extent; he’d also never explore the human condition with quite so piercing, uncompromising, pessimistic a perspective. 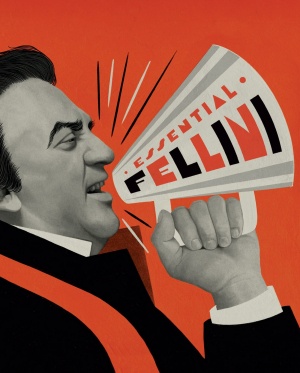 Il Bidone is, thus, no less sentimental than the typical Fellini film, though its particular brand of sentimentality is of a heavier, darker hue than usual. What’s more unusual still is the range of tones Fellini uses to variegate this sentiment. The film starts out almost like a black comedy, a moralistic yet mildly lighthearted tale of a group of petty crooks posing as priests or council workers or whatever profession suits them in order to swindle vulnerable folks out of what little they have. The less one has to give, Fellini keenly notes, the likelier one is to give it. That moralism is tempered by a little wryness here and there and an appreciation of irony that nevertheless signals some impending tragedy or another.

These crooks are a pretty familiar bunch: Roberto, the cheeky, reckless cad (Franco Fabrizi, suitably irritating), Picasso, the good-natured, immature dreamer (Richard Basehart, much too old for the part) and Augusto, the aging, wistful leader (Broderick Crawford, holding back to fine effect). Augusto is the archetypal Fellini protagonist, just 20 or 30 years later and yet to free himself from the rut of an easy, simple, comfortable post-war existence that’s only becoming harder, more complicated and less comfortable the longer he stays in it. The despair he feels within he sees in Picasso, a younger man already grappling in anguish with the hopelessness that plagues them both. The prospect of freedom and redemption he craves he sees in Roberto, yet it’s tainted by the capitulation it’d seemingly require to a life of total immorality. Augusto only wants to dabble in the bad stuff, not surrender to it wholly.

Il Bidone’s crucial scene is an extended sequence set at a New Year’s party hosted by an old acquaintance of Augusto, Rinaldo (Alberto De Amicis). He’s moved up but not on from their lowly shared beginnings in the small-time criminal world, still a criminal, it seems, just no longer small-time. The three crooks, each somewhat out of place at the swanky do, take advantage of what they learn at the party in different ways: Augusto looks to reconnect with Rinaldo and start up a business, bent investment in a straight project. A tragic, pathetic figure through and through, his every attempt is ignored, interrupted or outright rebuffed. Picasso, seeing his wife Iris (Giulietta Masina) perturbed by the cruelty she witnesses there, resolves to better the life they share with their young daughter – as with almost all statements of hope or kindness in this film, it’s likely either a lie or an empty promise. Roberto flits and flirts around the party, seeing only opportunity – this is the life he wants and it’s probably the life he’ll eventually get if he can keep his impetuousness at bay. This time, though, he can’t, taking a dangerous chance that results in all three suffering a grueling humiliation at Rinaldo’s hand.

This humiliation directly involves Augusto only briefly, yet it’s a devastating blow for him. Rinaldo represents, in this one action, both Augusto’s dream and his nightmare. He is the man he might have been had he only had the courage to get out of his banal, closed-minded way of life sooner – worth considering the era and place and the age of these two men, plus Rinaldo’s ties to Switzerland, potent suggestive details that wouldn’t have gone unnoticed by audiences in 1955. He is thus Augusto’s superior, wealthier, more successful, the very manifestation of every chance he passed up. Yet he’s also everything Augusto could never be, brutish, cutting, openly manipulative. Fellini links material and financial wealth inextricably to immorality, avarice and disregard for others, qualities for which Augusto knows he has only a limited tolerance. The assertion is that true contentment lies in making the most of your lot – Il Bidone’s single most contented character is Iris, though she’s hardly living in blissful ignorance. She’s perceptive, intelligent and honest. She notices details overlooked by others, picking up on signs in environment, body language and dialogue. She’s virtuous not because she lacks ambition but because she has the capacity to appreciate; it’s not that she’s happy because she doesn’t see, it’s that she does see and yet is happy.

If fatalism eventually takes a hold of Fellini’s narrative in predictable fashion, pushing it bit by bit toward an inevitably deflating conclusion, it’s not to the film’s detriment. The nuance and insight that have characterized this morality play up to its grim, depressing final act haven’t substituted the melodrama but rather enhanced it, afforded it depth and shade. Il Bidone remains a melodrama regardless, demanding a melodramatic ending, one where Augusto must confront the consequences of the decisions he’s made, not to mention the decisions he never made. Fellini indulges in a little mild deception here – unique within this film, which is otherwise entirely candid with its audience, lucid in what is real and what isn’t, what is the truth and what is a lie – if only to lend his film a touch of unpredictability for a moment. This sustains the film through its long, patient, entirely and almost laughably hopeless final sequence, where that good old Fellini sentimentality overwhelms the film in surely the darkest, saddest guise it’d ever take. A tough movie by Fellini’s standards, this is still an immensely rewarding watch, an example of a filmmaker taking an uncharacteristic risk with characteristic confidence. It may be the least Fellini-esque film he’d ever make but it’s also one of the best films he’d ever make.