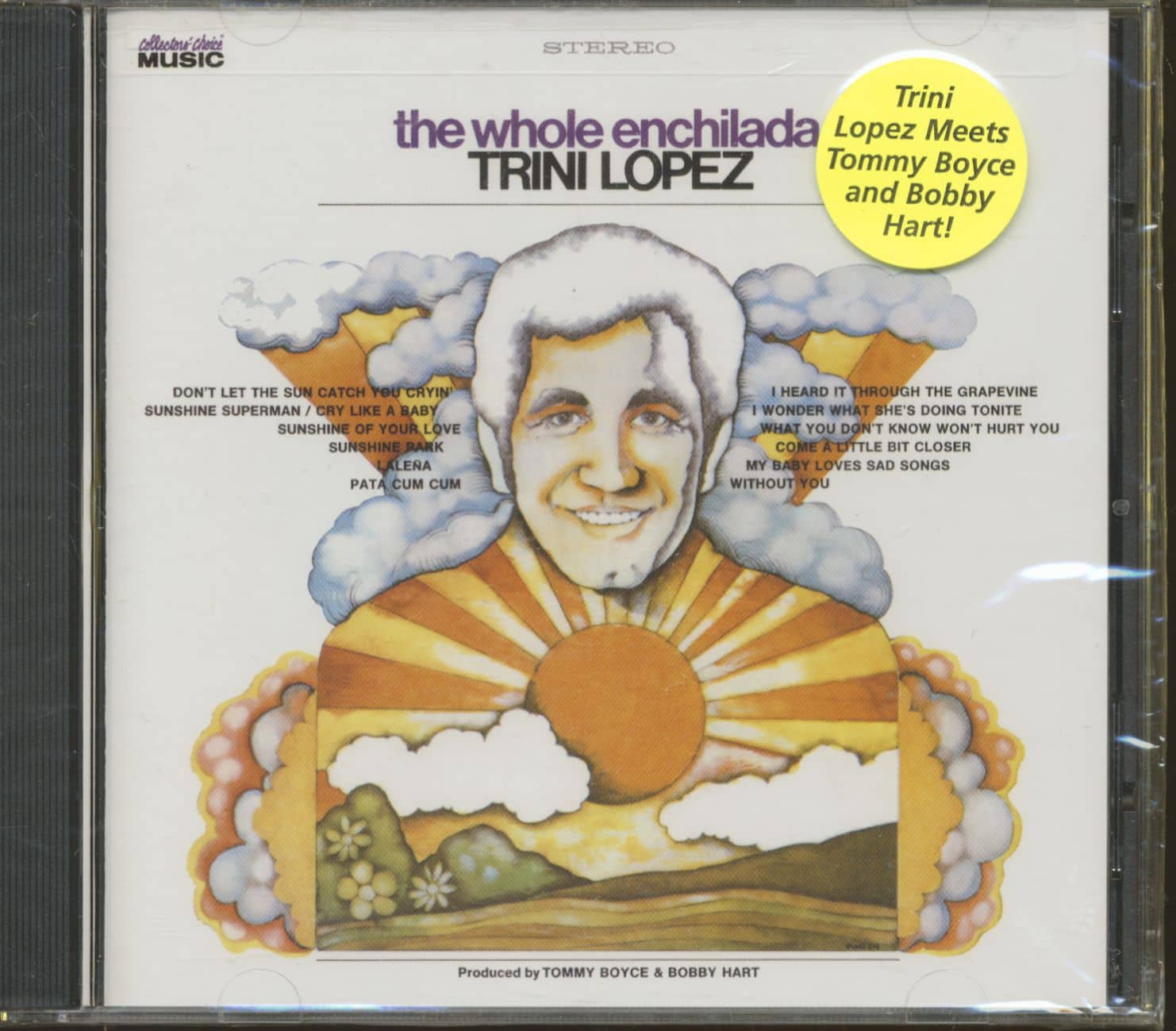 Popular history dictates that the hippie dream really took flight in 1967 with Sgt Pepper’s Lonely Hearts Club Band and the Summer of Love and peaked in August ’69 at Woodstock, but was killed that same year by a combination of the Manson murders (which actually took place a few days before Woodstock, but that’s mythology for you), the Stooges debut album (ditto, although its shock waves took a while to spread) and the final blow of the Rolling Stones at Altamont Speedway that December. Yet that still left two years for its spirit to seep into the mainstream, and it manifested itself in many and varied ways. In 1968, “The Monkees” TV show – which had channeled the same Pop Art zeitgeist as the 1966 “Batman” show as well as the pop music of the Beatles – was cancelled, and the group – as by now it had evolved from its manufactured origins – released their unabashedly psychedelic movie Head. In September ’69, in the aftermath of the summer of Woodstock and Manson, the first episode of Scooby-Doo, which combined both the goofiness and sinister undertones that the adult world saw in hippie culture, like, hit the screens and in the long hangover of the Summer of Love, as hippie burnout Danny says in Bruce Robinson’s Withnail & I, they were selling Beatle wigs in Woolworths. That was two years during which even the old guard, who had been the pop stars for a generation but had now been relegated to “easy listening” artists, could smell that there was something in the air. Many such artists to ignore it, but for some, the music they made in response stands as a strange, vibrant blip in the tasteful pastel shades of their discographies. Only a very few of those transcend novelty appeal; Trini Lopez’s The Whole Enchilada is one of them.

Although he was only three years older than John Lennon, singer and guitarist Lopez definitely belonged to the previous generation, audience-wise. After a few years of obscurity playing rock ‘n’ roll (he was even considered as singer for The Crickets after Buddy Holly’s death), he segued into folk music and, while playing club dates in Hollywood, was recruited by Frank Sinatra for his Reprise label. With the phenomenal success of his live version of Pete Seeger’s “If I Had a Hammer” in pre-Beatles 1962, Lopez’s career took off and, although never a huge singles artist thereafter, his thematic series of albums (The Latin Album,The Folk Album, The Love Album) sold in the millions, and he became a familiar face on TV and in movies throughout the ‘60s as well as a popular live artist until his death from Covid-19 last year.

When mainstream and counterculture forces sneered at each other across the barricades, Trini Lopez brought them together in a big, sunny hug. In 1968, Lopez had strayed from his Latin/easy/folk roots and scored a hit with the nostalgic Welcome to Trini Country a – no surprise – country record, made in Nashville with legendary producer, fellow Dallas native and friend of Buddy Holly, Snuff Garrett.
Although many of its songs were more or less contemporary, the album looked back to a more confident time than the student protests and international unrest of 1968, and featured Elvis and Patsy Cline’s backing singers The Jordanaires, bolstering Lopez’s already smooth vocal for maximum coziness. There seems to be little link musically between that album and the ebullient sunshine pop of The Whole Enchilada, but there are some strange connections. Snuff Garrett, presumably due to his background as producer of early ‘60s pop stars like Bobby Vee and Del Shannon, had been invited to produce The Monkees in 1966, but the band declined, preferring instead to work with the more hip songwriter/producer duo Tommy Boyce and Bobby Hart, who wrote some hit songs (and recorded what were used as guide vocals) for the band. Boyce & Hart essentially recorded much of the Monkees’ debut album with their band, The Candy Store Prophets, and pursued a parallel career as pop stars in their own right. Perhaps suspecting a conflict of interests, executive producer Don Kirschner fired Boyce & Hart from The Monkees show and shortly thereafter, the duo, looking for new projects, made contact with Trini Lopez.

Whether the catalyst for making The Whole Enchilada in 1969 was a reaction against the more staid and silky Welcome to Trini Country is impossible to say, but whereas that album was – thanks to Lopez’s distinctive Latin voice – a slightly ersatz country record, The Whole Enchilada is an entirely convincing piece of ‘60s sunshine pop. There are a number of reasons for this; most importantly, the sound and song choice favor Lopez’s voice – and crucially, his guitar playing. The virtuoso rhythm guitarist is a rarely celebrated musician, despite the fact that whole genres of popular music – most notably soul and funk – rely on them. And Lopez was second to none; his distinctive, Latin-flavored playing is at its best throughout The Whole Enchilada, and his playing on the record is perfectly complemented by the lead guitar of Louie Shelton, member of the Wrecking Crew and in 1969 already a veteran of many immortal sessions including those Monkees hits. There are some horn and string arrangements courtesy of composer and Ricky Nelson-associate Jimmie Haskell, but on the whole, unlike many of Trini’s records, the album is the sound of a rock band. They probably wouldn’t have won many accolades for coolness with the pop cognoscenti at the time (to be fair, Brian Wilson was only just beginning to earn those), but drummer Billy Louis was a member of the Candy Store Prophets and another veteran of the Monkees sessions, while bassist John Gallie, whose playing fits Trini’s guitar like a glove, went on to play with Freddie King, Albert King and Leon Russell, among others.

In theory, The Whole Enchilada has all of the credibility of Barry Manilow covering Nas, and indeed, for a few seconds, the album seems as though it might be a joke after all. Kicking off with a breezy version of Gerry and the Pacemakers’ British Invasion classic “Don’t Let the Sun Catch You Cryin’” – because Trini loved it – John Gallie’s lead bassline is alarmingly cartoonish, until Lopez’s perfectly timed guitar and instantly recognizable voice kicks in and all is well. The album contains a handful of new songs that fit into its sunny world perfectly, but its backbone is a series of covers by artists as diverse – but alien to his usual repertoire – as Donovan, Marvin Gaye and Cream, which are given a surprisingly soulful and refreshing makeover.

If “Don’t Let the Sun Catch You Cryin’” eases Trini’s audience into the album’s post-Beatles sound-world, the following medley of Donovan’s “Sunshine Superman” and the Box Tops’ “Cry Like a Baby” plunges them into its flower-powered heart. The sunshine theme continues with the cover of Cream’s “Sunshine of Your Love.” one of several unexpected highlights. Replacing the tediously bombastic blues-rock pretension of the original with an arrangement that has a cool, laidback and slightly sinister groove, superb fuzz guitar and an uncredited flute solo, Trini Lopez’s version embodies the mainstream absorption of countercultural cool while remaining just on the right side of kitsch. A Boyce & Hart original, “Sunshine Park” follows, and, as the fourth song in a row to mention the sun, gives the album an almost conceptual feel, reinforced by the cover artwork where a smiling Trini Lopez has a sun emanating rays from somewhere around his heart.

These songs are at the fluffier end of what The Whole Enchilada has to offer, but more unexpectedly, Trini Lopez doesn’t embarrass himself when tackling Marvin Gaye’s unimprovable “Heard it Through the Grapevine. The band retains the song’s distinctive groove, playing with low-key menace aided by Lopez’s choppy guitar, while he does his best to make the vocal heartfelt without copying Gaye’s unassailable original. Here as elsewhere, the Latin flavor of Trini’s singing helps immeasurably in avoiding the pitfalls of these kinds of covers; his voice is light and capable, but it never feels like the soulless crooning-by-numbers that lounge acts so often indulge in.

The Whole Enchilada was not Trini Lopez’s only release in 1969; within months it was more or less back to business as usual with The Trini Lopez Show, which displayed even more variety – covering bases as diverse as the “Hawaii Five-O” theme and “Light My Fire” – but lacked its sense of purpose, optimism and cohesion. But by then, the world was moving on, the psychedelic dream had turned sour, Woodstock was over, “Woodstock West” at Altamont Speedway was to end in chaos and death and the Vietnam war was to trundle on for another five years. But the spirit of the Summer of Love had seeped into the mainstream and in doing so had changed it forever; and The Whole Enchilada is a charming time capsule of that period when it seemed like the adults were finally paying attention and starting to catch up; and maybe those weird looking kids might just win in the end.