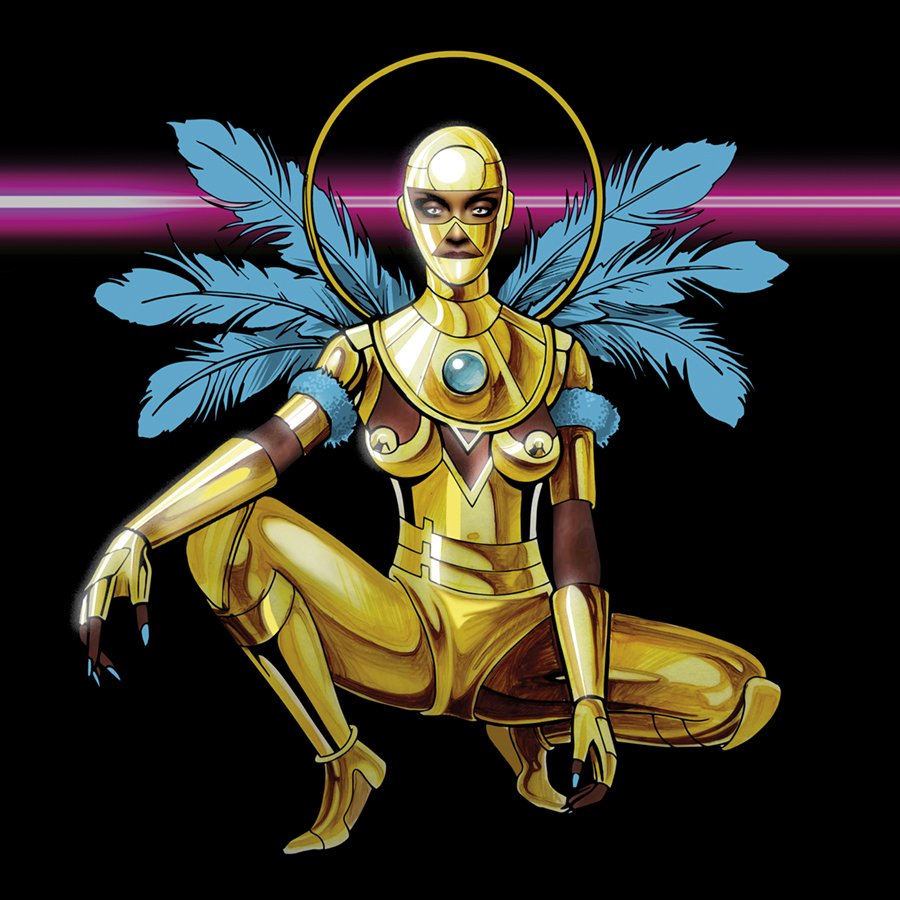 Dawn Richard has been around. Across the previous two decades, she carved a unique trajectory, starting from Diddy’s protégé to musical partner, then to indie, avant electropop star who sampled Godzilla roars and harmonized with Dirty Projectors, while animating and running a food truck on the side. Today, she opens a new chapter with Second Line: An Electro Revival. The title comes from Dawn’s native New Orleans, where funeral processions can include a marching band and local bystanders, who join in to celebrate a person’s “homecoming.” In this case, the “service” in question is her status as an indie musician, which ended with her official return to a label, Merge Records.

Long before anime became a music mainstay, a burgeoning girl group took their name after Dawn’s own original anime character. Of the many talents accrued over the years, her tough, reedy voice is her most distinctive; her command of language, from lyricisms to enunciation, plays into that formidable asset. She spins devastation into dance songs and elevates words to higher states of being – “Jacques-oo00OO-ZEE,” each syllable enunciated as she climbs an arpeggio, sounds positively posh. Part of this is innate blessing, another part is technique, and another is a keen understanding of language. The phrase “Danity Kane” said nothing about what the group might sound like or their influences, yet it worked.

Armed with her timbre and nimble delivery, Dawn leaps forth with an assured, powerful grace as King Creole. The king is an “assassin of stereotypes” inspired by her mother, who’s vocal snippets parallel the album’s overarching romance, struggles, and hometown glory. “I’m tryna find a purpose but I’m lost in your circus” so mulls “Nostalgia,” located near the start of an unassailable first half. The moment you put the album on, hips will roll for a guaranteed 20 minutes.

Amalgamating so much – electronica and soul music, Creole cuisine, Afrofuturism and mythology – is symbolic of Dawn’s greatest strength, and occasionally her downfall. Omnivorous and adventurous, she treks through songs built upon grand pianos (played by her father), drum machines set to house and submarine radar sounds (“Perfect Storm”), often all on the same track. With synth expert Ila Orbis at her side, these disparate elements are melded together to fit the Dawn Richard sound and mythos. “I’m on a mission to give you more of a vision” she pledges with not an eighth note wasted.

Said vision consistently draws from her own self-built mythos, referencing sauces and grits, mythical legends and a looming villain: the predatory, scavenging music industry. With their towering, echoing instrumentals, songs resemble titanic foes, which Dawn matches in size as her vocals climb towards her upper register.

Packed tight with various ideas and inspirations, tracks tend to transform into something entirely at some point, sometimes less enjoyably than others. A track like “SELFish” triumphs at certain points, namely its blooping intro and the undulating, rippling synths at the four-minute mark, but the parts that surround them, particularly the finale, lack that fire. The latter half of Second Line stretches out a number of songs, time that could be spent on too-short tracks “Voodoo,” “Le Petit Morte” and “Radio Free.”

Still, Dawn thinks like a bandleader, capable of understanding the beautiful, unexpected ways a song can morph and then guiding a listener through it. She’s done this for years, combining disparate songs together in her videos, a trend more artists are experimenting with today – see Iamdoechii’s “Yucky Blucky Fruitcake,” the most daring moments of Chromatica, or the most fun ones on Disco.

The drum & bass shift in the last fifth of “Perfect Storm” is exactly like the aftermath of a blizzard, its chilly vastness dissolving away though the heightened energy remains. Second Line’s finest transition, “Mornin | Streetlights,” is a gutting, faithful portrayal of an overestimated romance. As she realizes he might not remember her in the morning, she emerges resolved yet alone, an artist kicked to the curb after letting faith get the best of her judgment.

Seismic, drastic shifts play into the album’s title. Rather than mourn over endings, it calls upon listeners to celebrate changes, which can be as thrilling as they are devastating. Dawn never forgets what came before; instead she learns to find out how that part of their life, now a memory, an experience, fits within her ongoing path. No stranger to endings, she considers each one another movement in the symphony of her life, where she’s lead vocals, maestro and the principal dancer. Most people’s faves would never, because they can’t.

The Chequers: Check Us Out

Because modern culture gazes so fondly back on this era, Check Us Out is like a stake in t…